The following is a very simple outline of three of the process routes by which 78s could be made: the three-step, five-step and seven-step processes. Obviously, each one was more complex; but also permitted considerable increase in output.

LF Mudge uploaded an excellent 1928 silent film on the making of Columbia Records – a must-see for all early 78 enthusiasts! Most of the footage is based in London, but we believe the Stravinsky conducting sequence must have been shot in Paris.
https://youtu.be/8d9sNe2OWyI 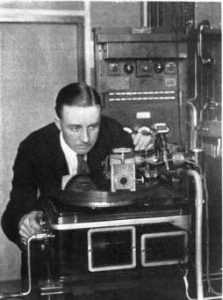 Here is a picture, ca. 1930, of a wax master cutting lathe and its operator. I have lifted it from a fascinating booklet entitled: ‘The Recording and Reproduction of Sound’. A.G.D. West, M.A., B.Sc. Cantor Lectures, Royal Society of Arts, London, 1931.

The main thing is a turntable carrying a massive circular wax blank. It is highly polished. After suitable adjustments, e.g. depth of cut, groove pitch &c., the turntable was run up to speed, the cutting head lowered onto the wax the right distance from the edge, and the signal given for the performance to commence. As it proceeded, a feed-screw moved the cutting head across the rotating blank, and so a spiral groove would be cut in the wax, carrying the sound in the form of a lateral modulation of the groove.

The resulting engraved disc was the Master Record. But being made of wax, the master was delicate and susceptible to hazards, so the next stage in the process would be carried out as soon as possible.

Step Two – The Matrix – in this case, also the Stamper.

The wax master is positive, in that it could, in theory, be played back on a gramophone. It would of course be destroyed in the process, but the term positive still holds. The need was to render this wax into a fixed & durable form, and as soon as possible. So the master was brushed over with finely-divided graphite, which conducts electricity. The coated wax was placed in a tank containing an aqueous solution of salts of certain metals, such as Nickel and Copper. A rather strong direct current of electricity was passed through this bath, and, the graphite-coated wax having being made the cathode, Nickel and Copper ions from the electrolyte were deposited on it. In time, this coating became relatively thick.

After the right amount of time, the wax/metal couplet was withdrawn from the bath, and the metal peeled away from the wax. This process is called electrotyping. The new, durable metal part was called ‘The Matrix’. It is negative; i.e. what was the groove in the wax, was now a ridge. This matrix could be used to press discs.

In the earliest days of disc recording, that is exactly what was done. The matrix served as a stamper. It was put in a press, and impressions of it were made into a thermo-plastic medium, producing gramophone records. A very simple process.

Well, up to a point; but this very basic three-step process was fraught with problems, which will be obvious to you. You cannot make a very large quantity of pressings without wear occurring to the stamper. Other factors were involved, such as accidental damage to the stamper, &c. Only ONE matrix/stamper could be derived from each wax master record. So when anything went wrong, it became necessary to re-make the recording. Indeed, this was frequently done, to the extent that some of the earliest disc recordings, say from around 1895 to 1900 may exist in several different versions. They may even have been re-made by different artistes, the original performer not being available. Altogether, a veritable minefield. This was a great problem for the earliest record companies, whose products were often in great demand in a new and rapidly-expanding market. And for future discographers, their problems were to become almost insurmountable!

Q. What could be done to enhance reliable production of large quantities of discs?
A. The Five-Step Process.

NEW STEP! The matrix was placed in a plating bath, and, by electrotyping, an even more robust metal part was derived. This was called the Mother. If desired, several mothers could be produced, since the metal matrix was not harmed by this process – unlike the original wax master, which was almost inevitably spoiled when the metal matrix was stripped from it. The mother was positive, because it was an exact duplicate of the original wax, only very durable indeed.

NEW STEP! The mother was placed in a plating bath, and electrotyped. This process produced a negative metal part, which, rather obviously, could be used for making…..

Exactly as previously described. Positive pressings (= finished records) were made from the stamper. And if the stamper wore out (bear in mind that the material in which discs were stamped was abrasive; it had to be, so that the sharp needle playing it would wear to fit the groove profile), then a second stamper could be derived from the mother. With luck, many stampers could be electrotyped from the mother. And if eventually the mother itself wore out, then another mother could be derived from the matrix, capable of producing many more stampers.

All in all, a vast step forward in disc record production!

Well, almost. But as already remarked elsewhere on this site, even in the early days, the record industry was extremely international. So it was necessary to make recordings available to some, or all, of the foreign branches of the company.