The Homophone codes were first written up by Peter Hulpusch. (“Dating Homophone Records”: Record Collector Vol. 24 Nos.3/4, June 1979, pp80-1). In addition, a Homophone dating article by Peter Copeland appeared in ‘The Historic Record’ – I have a photocopy, but the number of the magazine is not known. Thanks to the late Arthur Badrock for supplying the reference & photocopy. What follows is merely an informal ‘gossip’ on the topic – with particular reference to the early and short-lived period (1912 – 1914) during which Invicta records bore a confusing variant.

Unfortunately for us, very few 78 records carry dates to indicate when they were recorded, plated or pressed. But the German Homophon Company was a notable exception. Indeed, between about 1905 and 1926, their discs actually carry two dates: as it were, a gift to future Discographers. It would be very nice if one of them was the actual recording date of the performance; but alas, there is an increasing consensus that this is not the case. If so, then what do the dates signify? 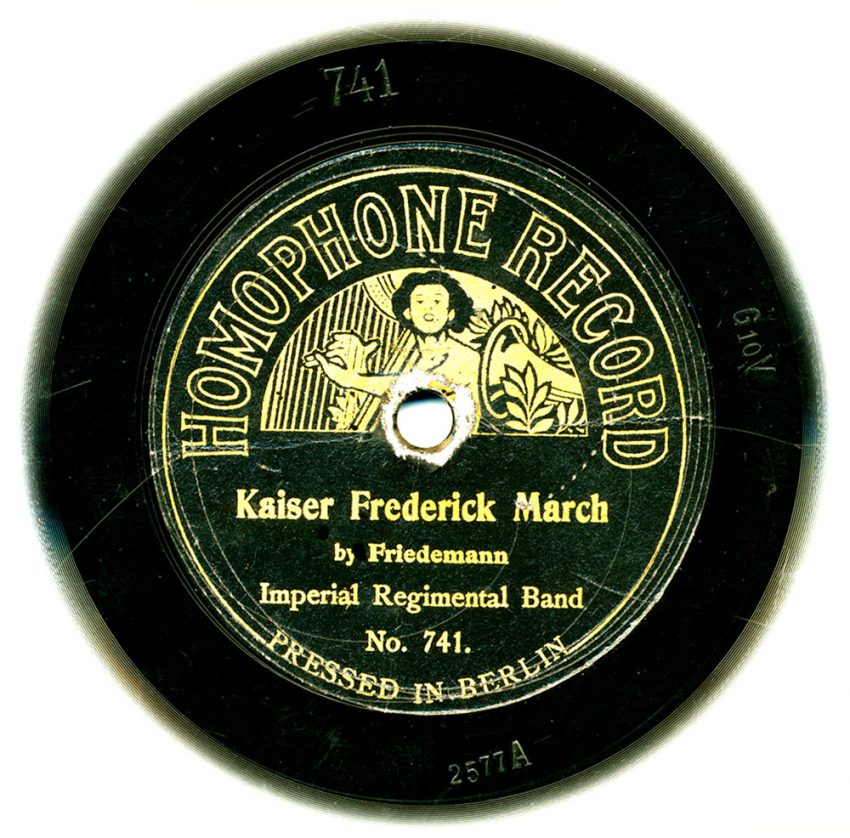 Here is a typical early Homophone as sold in Britain – and doubtless in other countries as well as Germany, each with suitable repertoire. The contrast has been exaggerated to show the numbers ‘in the wax’ (as it has been in all the other scans on this page). At the top we find 741. This is a master number or control number, unique to each recording. At the bottom appears 2577A. This is a date in the form: day-month-year. 2577 may appear rather inscrutable, but it can only yield one plausible date, viz., 25th July 1907. What the ‘A’ suffix means is not known to us.

The other marking to the right of the label is G10V. Thanks to the pioneering work by Peter Hulpusch, we know that is a date in the form month-day-year. The number in the middle is clearly the day of the month, confirmed by the fact that no number larger that 31 is ever found. The first letter had to be the month, because only the twelve letters A to M (omitting ‘I’) are ever found in this position. (It has been assumed that A is January, B is February and so on). The final letter, inevitably, was the year. To cut a long story short, it is known that these letters run backwards, and seem to be based on Z representing 1901. Homophone disc records only date back to 1905, but it must be admitted that 1901 is a logical starting point.

Here is a table in accordance with Peter Hulpusch’s findings:

Before trying to figure out what the dates might refer to, let us study a few more Homophones – or Homophons, or Homochords, Homokord, Homocord; the name evolved over the years – in order to look for general trends in these dates.

We’ll begin with the other side of the above record. 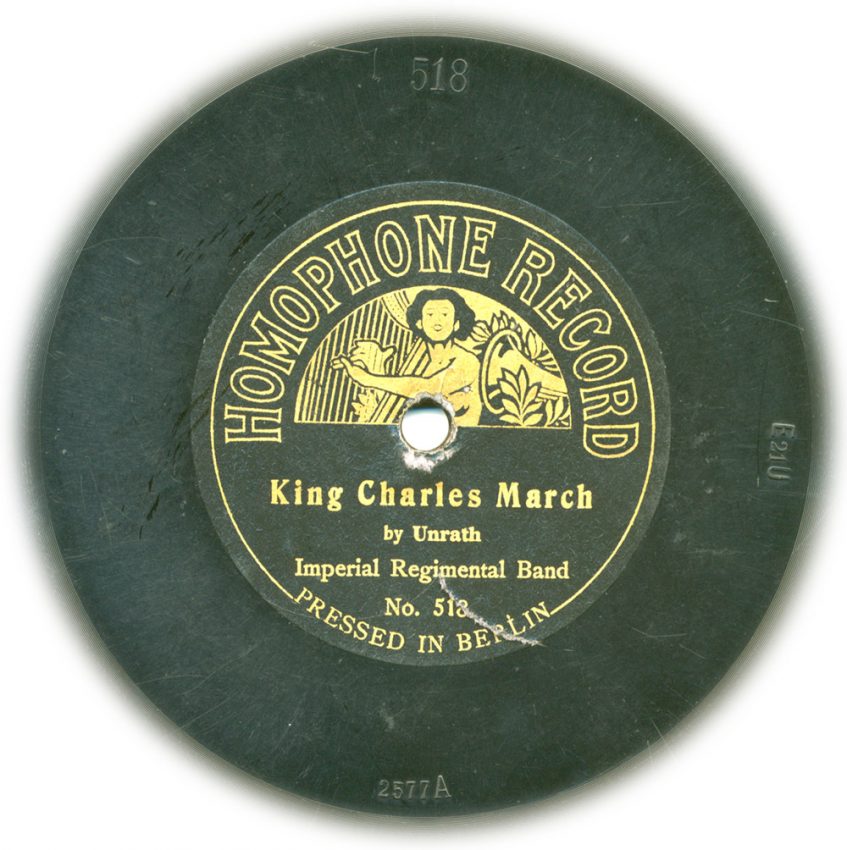 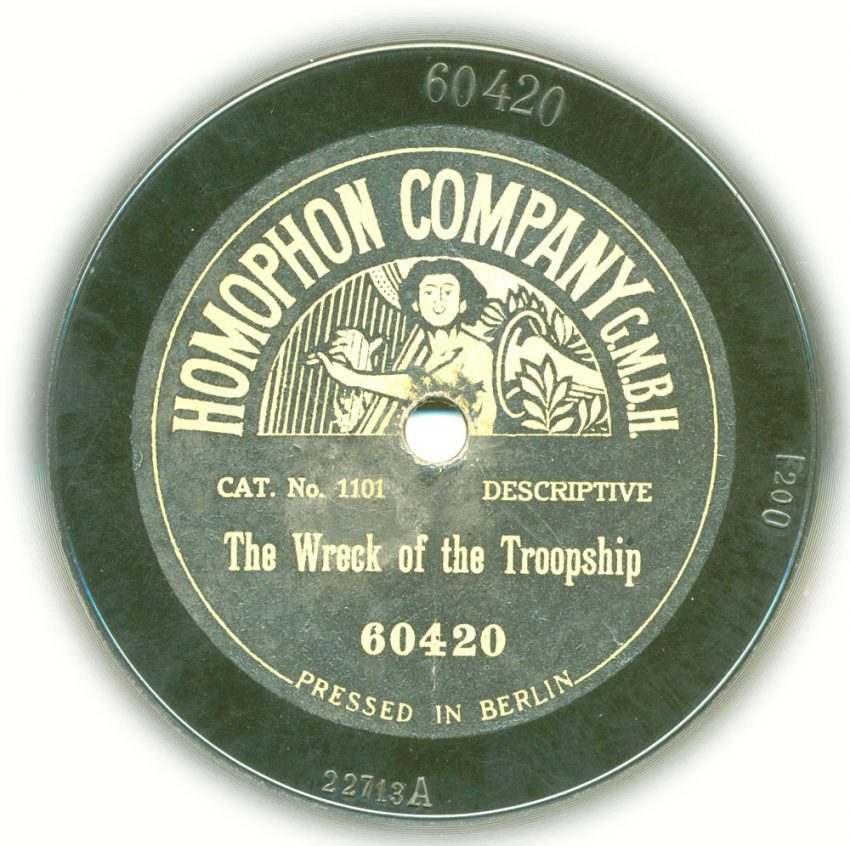 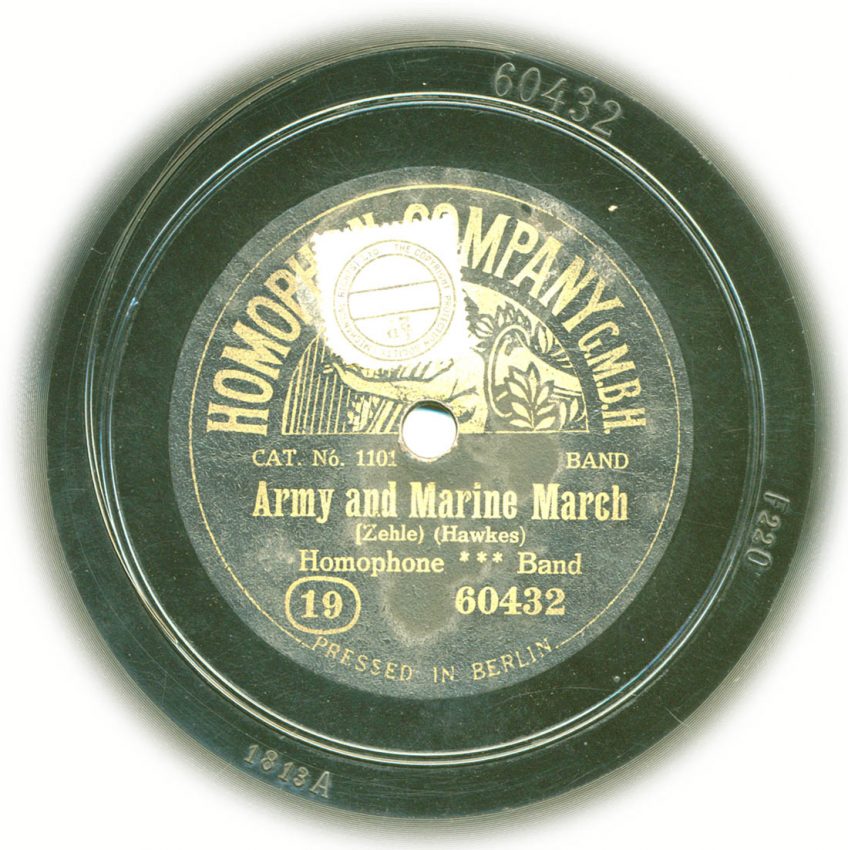 When the Great War of 1914-1918 broke out, these German-pressed records naturally disappeared from the British market. But they continued to be made in Germany for many years. Homophone were extremely conservative in their record manufacturing practices, and the manner which they pressed the details into their discs, as you will see as we pick up the story in Germany, with a Homokord from 1922 and a Homocord from 1925. 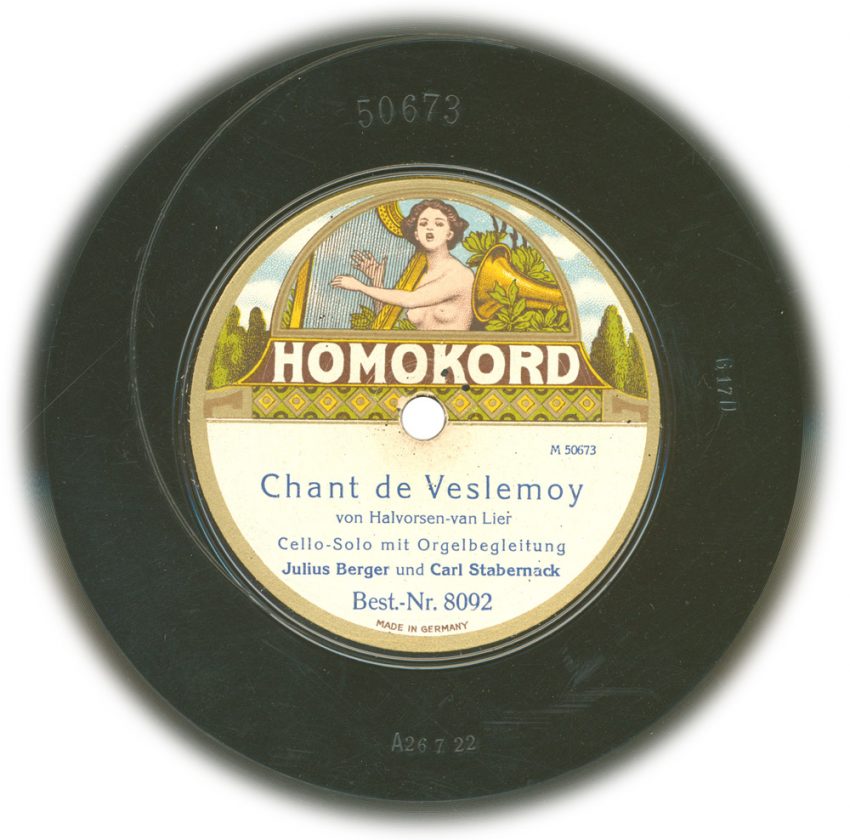 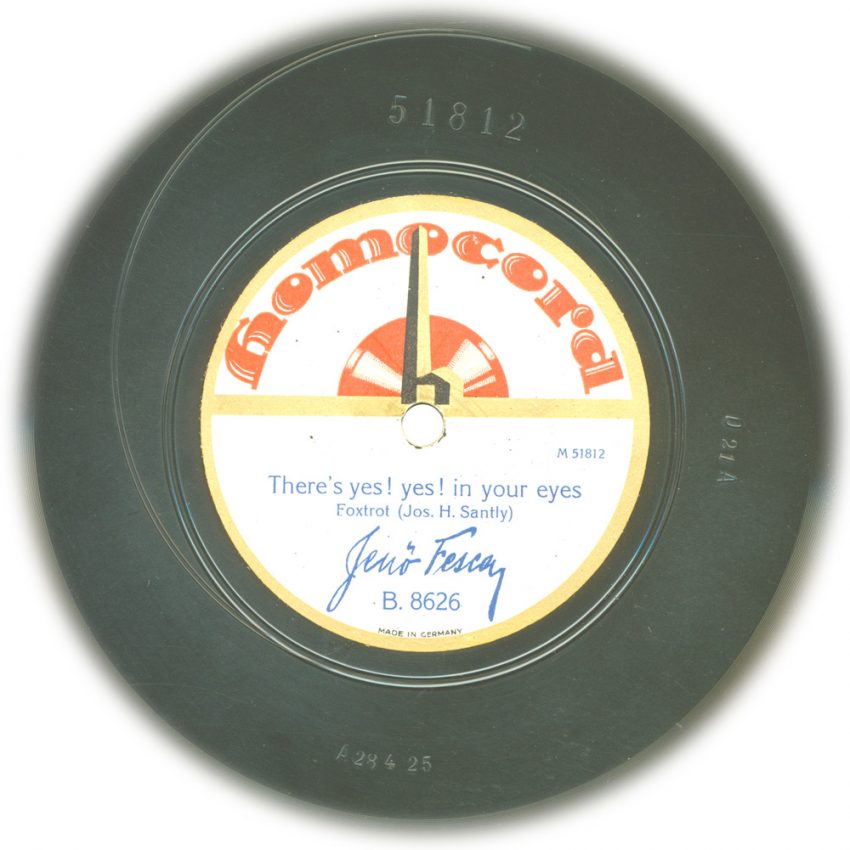 It’s time to sum up. We can read these dates, for sure. But what events do they refer to? The fact that the ‘letter code’ date always precedes the ‘plain date’ originally led to the opinion that it was the recording date. The snag with this attractive idea, is that very occasionally, some copies of the same title have a different letter code. True, it is quite possible that an artiste was called back to re-make a title. The only way of checking this would be to bring two such copies together, and play them in parallel. As far as I know, this has never been done.

In our opinion, a more likely explanation is that the G10V-type date tells us when the mother was electrotyped from the matrix. A mother might serve to produce quite a few stampers, which could be used to press perhaps thousands of discs. Still, if the mother finally wore out, another would be taken from the matrix – and this would naturally bear a later date.

In that case, what does the plain date mean? It was suggested long ago that it is the date the disc was pressed; but a big selling record would probably require a press or presses to work for several days to satisfy the demand for it; and to change the date code on the metalwork for each new day would, frankly, be ludicrous. No: again in our opinion, the plain date is most probably the date the stamper was plated from the mother.

Invicta records were a product of the German company Berolina G. m. b. H, and the initial agency for them in this country was acquired by William Barraud (brother of Francis Barraud of His Master’s Voice fame).

These Invicta records were almost certainly pressed for Berolina by Homophone, for they too carry a letter code date – though no plain date. Although appearing exactly the same, e.g. M23Q, it has proved the bane of many – including the present writer – who have tried to interpret it.

Our first fundamental mistake, was to combine long lists of Homophone letter codes with Invicta letter codes. It seemed the obvious thing to do: they must have been made by the same company: and the more statistics, the more accuracy of analysis & prediction, surely?

But no. Only confusion resulted from studying these mixed codes. Eventually it emerged that for whatever reason, Homophone used variant letter code for Invictas. And to cut a long story short, it was a simple but thorough inversion of the original Homophone code. (A) Instead of being in the form ‘month-day-year’, they were ‘year-day-month’. (B) Instead of the months being A to M (omitting I), they were O to Z. (C) Instead of the years starting at Z in 1901 and going to A in 1925( omitting I), they were A for 1901 and Z for 1925 (omitting I).

Anyhow, once this enchantingly logical process of code inversion was grasped, the rest was easy. It was of course the years that ‘gave the game away’. For unlike Homophone itself, which made disc records from 1905 until after its letter code had expired in 1925, Invicta records were produced for only three years: 1912 – 1914. This accounts for only the letters M, N & O appearing on the letter codes for Invicta discs. Let us look at an Invicta… 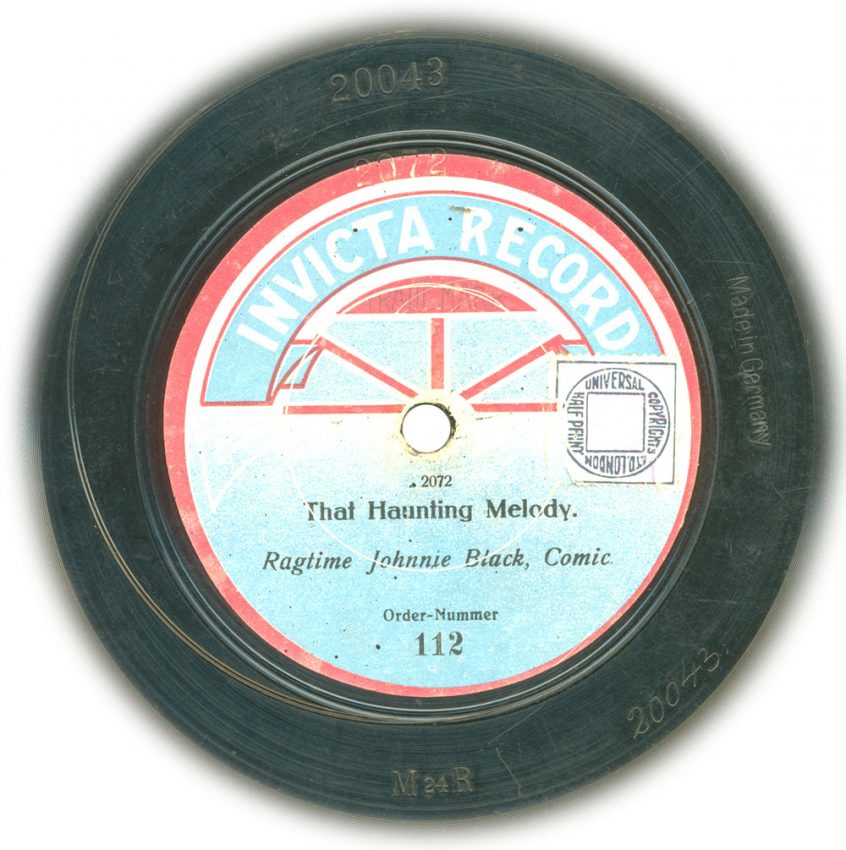 The letter codes appear below the label – M24R. Thanks to the generous help of many discographers, scores of Invicta letter codes have been studied  – far more than for Homophone – and without further discussion, here is a proposed table of the Invicta Code.

Only three year letters are involved in Invicta date codes: those in red above. M is the commonest, though N is plentiful too. O is extremely rare and there are only 5 sides known to us. Associated with the rare year O (1914), only two month letters have been seen: Z & Y, which equate to January & February 1914. This accords well with the facts, since the sales of German Invictas were minuscule in 1914 . Following a dispute with Barraud, a new agent, John Abrahams, had been appointed. He clearly wasn’t very good at selling them, for these later Invictas are almost never seen. And it goes without saying that there cannot be German Invictas with a month date after August (or more likely July) 1914, as the Great War broke out in early August.

We point out, merely as a piece of trivia, that the two systems would have coincided during December 1912. M15O would mean 15th of December 1912 whether it be a Homophone or an Invicta!